Another Asha post? Oh come on, Andy, we’ve read just about all there is on the new N9-like Asha 501! Yes I know, so I’m not going to subject you to another 1500 words on why, oh why did Nokia ditch MeeGo because it looks so great reincarnated in the 501!

No, this is not a post about the latest Asha phone, but one from a little while ago.

Mr Richard Yates, long-time smartphone aficionado, has a white Nokia Asha 302. And he decided, sometime last year, to send it on a world tour. Not in a hot air balloon, but by loaning it to other mobile geeks around the planet. His only provisos were that the person look after it, use it, write something about it, and then send it on its way to somewhere else in the world. Cool idea, I think.

After Richard had lent the 302 to everyone’s good friend and smartphone expert Stephen Quin, Stephen wrote a superb blog post on the QWERTY-toting Asha for his hub page, which you can read right here.

While I was over in England recently, Richard gave me the Asha 302 (personally, I’d like to add – it’s always nice to meet up with fellow geeks in person!) and I packed it and brought it back to New York with me.

To be honest, I hadn’t used it very much since I returned home, as Jimmy from Nokia Innovation had sent me a huge box of goodies including a Nokia N900, N950 and Lumia 820 to play with, which, in addition to my own arsenal of Nokias (E6, E7, N9) kept me pretty occupied to say the least!  The poor Asha craved attention but didn’t get very much. 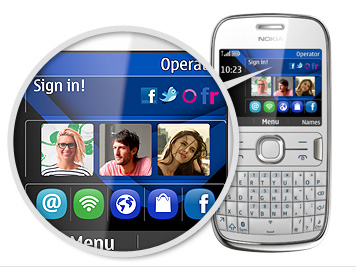 So I thought, right, now that Jimmy’s phones are safely back with him, I can give this little Asha some love and attention.

And love and attention it deserves. Because it is a great little phone with a whole lot going for it.

Now let me just start off by saying that Stephen’s review is the one to read because he is far more honest and thorough than me in reviewing devices. But I will simply give you my honest opinion of this mobile phone and how I’ve found it to be over the past couple of weeks of in-and-out usage.

Of course, the very first thing you can’t help but think about when you hold the box that the 302 comes in is, can I deal with an Asha, running Series 40? Or perhaps, can I deal with a non touchscreen and a physical qwerty keyboard? Well, you may be thinking both of those things, but for the sake of being objective, I used this phone without comparing it to my other phones in the armory (as Ted Salmon likes to call it!) There’s not even any real point in comparing this qwerty with another, similar Nokia qwerty, the E6 because software wise they are world’s apart.

So when I used the Asha 302, I used it while doing my best to forget I had other phones in the house, and I tried to use it for what it is capable of doing, within the S40 ecosystem. Which isn’t much of one to be fair. 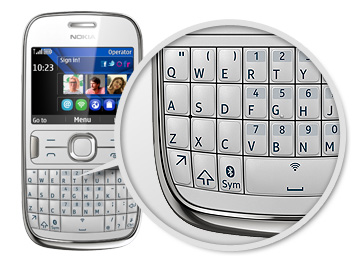 Being somewhat of a fan of the E6, I took to the qwerty keyboard quite quickly, and even though larger hands and fingers might mash and squash several keys at once, I found myself doing a pretty good job of typing out texts and emails. The really nice thing about the Asha range from what I gather and from my first-hand experience of this one is that Nokia have really beefed the internals up; the 302 comes with a 1GHz processor for example. Compare that to the last S40 phone you probably owned (such as the Nokia C3 perhaps) and you can really see how giving this little go-kart a V6 engine can really make it fly. I was thoroughly surprised and pleasantly too, at just how quickly the 302 swished from one app to the next, through screens and menus, and when typing. I couldn’t help but recall the lag (oh the lag!) on my S60-running Nokia E75 when typing: the letters and words appeared on the screen a long while after typing them out, which was rather off-putting to say the least. No such lag and slouch here on the 302. Which is a relief because if it was a sticky experience, it would make me think twice before picking it up again. In this day and age, and after using full-blown processors, nobody could go back (realistically) to the old days of lag and slouch. Hey, N97, I’m lookin at you!

Another thing about the 302 that really impressed me, and again reminded me that this is an OS of days gone by when things were wonderful, (ahem) is the battery longevity. I was utterly gobsmacked when the phone went past a whole week of being in standby with only very little interaction from me, and went a whole three days with moderate use. Three days! That was just superb, and I can’t help but remember the days of 2003, 2004 when my Nokia would last as long. Then again, we’re dealing with a non touchscreen and a lean and lightweight OS, (no true multitasking here folks) so it isn’t really that much of a shocker, but it’s still nice all the same. Perhaps you’re going on a camping trip and power sources might be hard to come by. You can rely on this phone getting you through the weekend with moderate use, and not have to worry about digging around for the DC-16 charger or switching a battery out. Pretty good stuff. 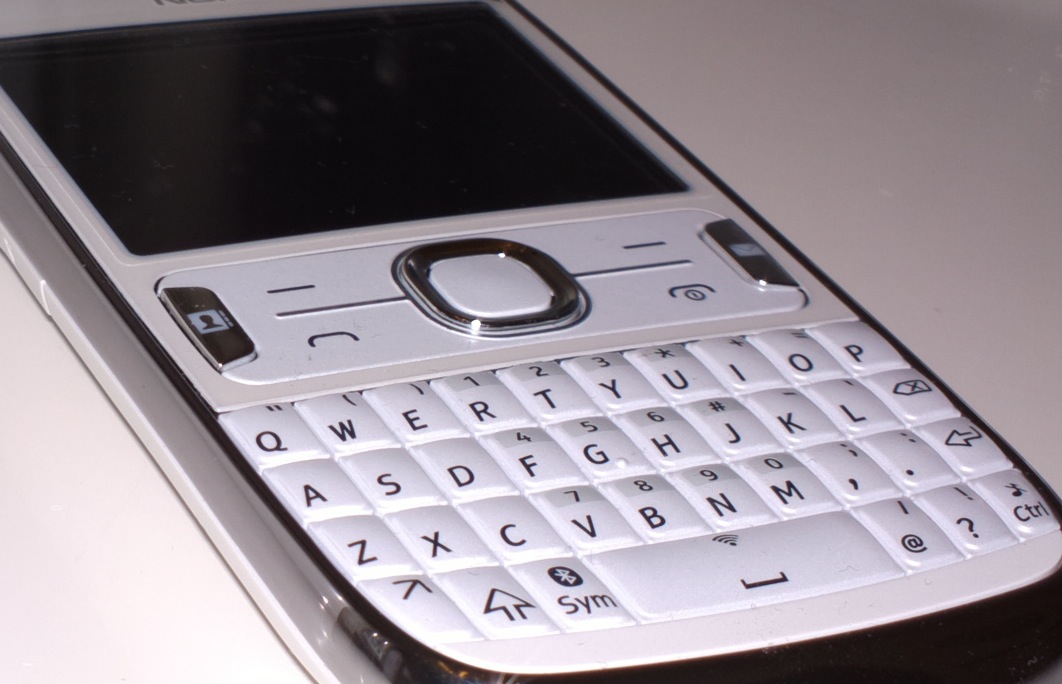 As for everything else, Mr Quin has covered it in as much detail as the best reviewer could, so no point in repeating it all, save to say I agree with him on all of his points. I can definitely agree with him that for many people, after an exclusive diet of touch-only slabphones for the past 3 or 4 years, many people would have a steep (re)learning curve to get used to such a small screen again, (and one that you can’t touch to interact with the OS), and also, to reacclimatise to using a physical qwerty keyboard again, after Swyping and tapping on glass (or plastic!) for so long.

So then, who’s it for? I think this would be a perfect upgrade for my mother, who has been besotted with her Nokia E63 for the past 2.5 years. The Asha 302 would still give her the wonderful tactile feel of a proper qwerty keyboard, in the same design language as the E63, but with much souped-up internals:

Now of course, if you want to be all-connected, all-online, singing and dancing, then this isn’t for you. Especially if you’re coming from an older generation smartphone that handles multitasking really well like the Nokia N900, or any of the Symbian^3 series of phones such as the C7. Then you might find the 302 lacking somewhat. But for somebody coming from an older, aging qwerty phone such as the E63 or C3, or a much more basic feature phone such as the Nokia C2-01, then this won’t scare you off. There won’t be any “hover-view” or infrared controlling of your TV from the Asha range, but it will satisfy most people who don’t need the laser-and-dry-ice show in a mobile phone.

Thanks again to the marvellous Richard Yates for his generosity in lending this out to me and the rest of the world! Now all I need to do is find out who would like to borrow it next. Any takers? Please get in touch!

A Guide to Speeding Up Your Chromebook